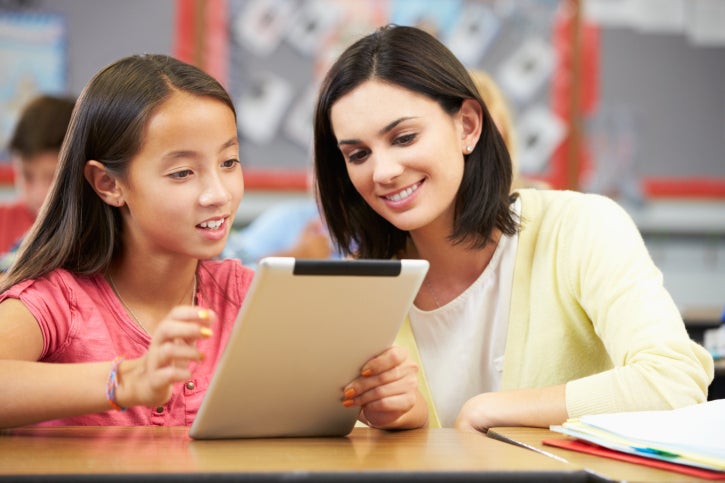 It’s spring break, and high school students are eager to put away their books, binders, pencils and… iPads?

High school classrooms, teaching techniques and the very way students learn may receive a tech infusion in the near future. Already some schools across the country, most notably the Los Angeles Unified School District (LAUSD), are bringing in tablets and other technology.

“Technology is becoming pervasive in the classroom and playing a strategic role,” says Carolyn April, senior director of industry analysis at CompTIA.

CompTIA surveyed teachers, admins and students late last year and found that idea of technology in the classroom is exciting for everyone. All tallied, 58 percent of schools with 1,000 or more students use some education technology, compared to 45 percent of smaller schools.

Putting Tech to the Test

Three out of four teachers believe technology positively impacts the education process. Many teachers are under duress from the pressure of raising test scores, April says, and so they see the use of technology helping them hit their goals and improve student achievement.

Three out of four principals and vice principals believe technology plays an important role in recruitment, particularly among millennials holding newly minted teaching credentials. April says young teachers who grew up with technology simply expect to work with tools such as tablets, not so much chalkboards.

Most importantly, nine out of 10 students believe the use of technology in the classroom will be crucial in helping them get jobs down the road. It’ll also change the way they learn. Technology can remake the classroom experience from listening to lectures to learning interactively.

[Related: Will iPads in the Classroom Make the Grade for Students and Teachers]

Educational Technology Is More Than Tablets

But it’s important to note that the tablet is only the tip of the iceberg, especially when considering the many cloud services in the education market. There’s classroom management software and online curriculum for teachers, game-based learning software for students, and wireless network infrastructure and backend software, such as mobile device management, tying everything together.

Technology in the classroom isn’t easy to do, and early adopters have had a rough learning curve. Educators across the country who dream of iPads are surely cringing as they watch missteps in the massive iPad rollout at LAUSD.

In the summer of 2013, LAUSD began a $1.3 billion effort to put an iPad in the hand of every student, teacher and admin. Since then, there have been rumors of stacks of iPads collecting dust, students using iPads inappropriately, L.A. schools Supt. John Deasy resigning under pressure over his close ties with Apple and Pearson, (which provided the online curriculum) and, most recently, the FBI seizing documents related to the contract bidding process, Los Angeles Times reported.

Then there’s this alarming stat from an outside firm hired by LAUSD to assess the project’s progress last fall: Only one teacher out of 245 classrooms visited was using Pearson’s online curriculum, Los Angeles Times reported. Four out of five high schools reported that they rarely used the iPads.

Apparently, the rush to get iPads in people’s hands outpaced what teachers and students should do with them. Development and training lagged behind, a common problem in large scale technology deployments. In fact, CIOs say change management and user training are often the biggest hurdles in a project.

You Can’t Stop the March of Tech

“I don’t think this one case is going to stop the march of time when it comes to different types of devices in the classroom,” April says, adding, “If you’re seeing pushback, it’s because [teachers] are being handed a bunch of tools but not taught how to use them… that’s not a technology problem.”