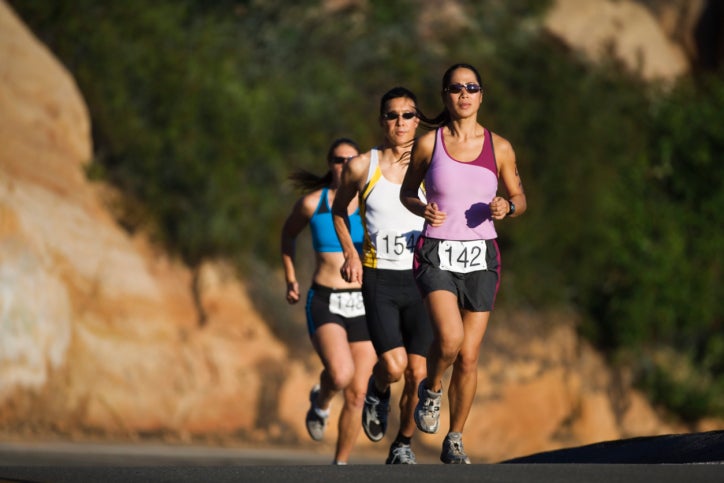 Whenever Apple puts out a new product, it’s going to draw headlines. There’s no better example than the Apple Watch – its first offering into the fitness market, which has a potential to be a 22 million unit market in the U.S., according to Market Strategies International.

But how will Apple Watch Sport do with runners, many who already run with something on their wrist?

It’s too soon, of course, to tell since the watch just arrived in most consumers’ mailboxes. But early indications are that the Apple Watch could go either way for this coveted group of potential users.

Ramon T. Llamas is research manager of wearables, mobile phones and smartphones for IDC He’s a runner, too. “For me, it comes down to the following things: time, distance, heart rate and cadence,” he said.

[Related: How to take a screen shot on your Apple Watch ]

The Apple Watch delivers those things, with one exception: it doesn’t have a built in GPS. “You must rely on your iPhone,” Llamas said. At first — then, the watch is supposed to learn your running patterns. “After a while, you can go without your iPhone and it’ll track you from there,” he added.

The Apple Watch Sport could also appeal to runners who wants more from what’s on their wrist than just a fitness tracking device, says Janice Anderson, vice president in the technology division of Market Strategies International.

“Where the Apple Watch may have a competitive advantage is that its added offerings, which for a reasonable premium, allows runners to track their health while viewing an incoming text, scrolling through new emails and paying for a Starbucks coffee without compromising style,” Anderson says.

[Related: 12 lesser-known Apple Watch tips and tricks you should know ]

It can also track heart rate without a chest strap, a device that annoying and uncomfortable to some runners.

That lack of a built in GPS could be a stumbling block for Apple, especially for runners who want to track their workouts as accurately as possible. “For some people, they proclaim this to be a nonstarter for the watch,” says Llamas.

[Related: FAQ: Everything you need to know about the Apple Watch ]

Brian Dalek, digital editor at Runner’s World, has been testing the watch for the publication. On April 26, he ran the Big Sur International Marathon with the Apple Watch Sport on one wrist and the Garmin Forerunner 10 on the other.

“The Apple Watch tracked just like the Garmin did,” he said. However, he carried his iPhone with him, so he expected that to be the case.

He doesn’t normally run with his phone, but did so on this marathon because Big Sur is one of the most scenic races in the United States, and he wanted to take pictures – and test the Apple Watch at the same time. He’ll start doing phone-less runs through the month of May.

“More sophisticated athletes who are hoping to track speed and path and potentially altitude may lean towards a specialty device,” says Anderson. Another potential problem: Most current fitness trackers don’t need to fit tightly in order to work, as the Apple Watch does. She says that fit may not appeal to athletes. Wrist tattoos may also interfere with the Apple Watch’s heart rate tracking ability.

Dalek says he’s disappointed that while the Apple Watch does sync with third-party fitness apps, it doesn’t allow those apps to overlay your workout on a map (he says he confirmed this with Apple).

So while he could do that through Garmin Sync for the Big Sur International Marathon, he couldn’t with the Apple Watch Sport. For runners who like share those maps on social media, it’s a gap in what the product offers.

“If a runner already intends to buy a fitness band or GPS-enabled watch, the Apple Watch will cost $150 to $250 more than what they already had budgeted, with added features and connectivity, which for some will increase the value of a smartwatch,” Anderson said. Those extras could make the watch feel not quite as expensive.

“The Apple stamp is on it, for better or for worse. It’s differentiated from everybody else,” Llamas said.

The design of the Apple Watch is less clunky than some fitness trackers, and could appeal to runners who want a device they can wear on the road and in the office, too, without it sticking out.

Llamas also says that durability will be a factor in how the device does with runners, too, especially at that price point. “Do you want to get it all sweaty and nicked up because let’s face it: runners do fall on occasion. We bump against other people,” he said. Dalek hasn’t experienced any problems yet, but when interviewed he’d been using it for less than a week.

Still, as always with an Apple product, this watch is still expected to change the industry.

“We watched the iPhone disrupt the mobile market with strategic capability convergence and I’m seeing the beginnings of the same trend with smartwatches,” said Anderson. “Manufacturers of fitness trackers should keep a very close eye on Apple Watch performance.”