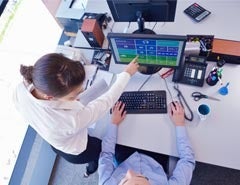 More Microsoft news, I hear you cry! And so I am here, with another round of articles about the latest updates, upgrades, and changes our favorite software giant has announced. Read on to learn more about what’s new in Office 365, how Windows 10 is shaping up, and more.

The full-screen Windows 8 Start screen has been a real sore point for many of us, and Windows 10 aims to fix all that. The new Start Menu featured in the Windows 10 Technical Preview combines many of the smart ideas Windows 8 introduced with the usability we’ve grown used to in previous versions of Windows, giving the best of both worlds.

Office 16 release targeted for second half of 2015

Microsoft is aiming for the second half of next year to release both its next-generation Office client and server applications.

Microsoft released a new version of Outlook for the Mac today, aimed exclusively at Office 365 subscribers. The company also detailed ambitious plans for Office for the Mac upgrades next year.

Microsoft is planning to embed mobile device management technology from its Intune product into Office 365, giving enterprises a way to secure and keep track of employees’ smartphones and tablets from within the friendly confines of its cloud productivity suite.

Microsoft debuted a new volume licensing agreement earlier this year, touting it as a simplified — and much shorter — version of the software giant’s existing agreements.

Microsoft has improved document collaboration capabilities for its Office 365 subscribers, particularly for users of its Outlook Web App and OneDrive for Business solutions.

Microsoft has rolled out two new cloud-based solutions in recent days, including Disaster Recovery to Azure and Redis Cache services.

After releasing SQL Server 2008 R2 SP3 earlier in the week, Microsoft followed up with the release of the final service pack for the first revision of SQL Server 2008.

How the Surface Pro 3 changed the way I work

For the first time in 20 years, I don’t own a conventional clamshell laptop PC. The Surface Pro 3 has taken over all the functions that I used to need a laptop for, and it makes an excellent tablet, too. Here’s how I use this device in PC and tablet modes.

He explained that a new “Threshold Windows Store,” when combined with Microsoft’s current Windows Store, will result in a “converged app store” that will open up new app procurement and licensing scenarios for organizations. Threshold was Microsoft’s code name for Windows 10.

And Finally, Just for Fun: Technology predictions from 1985: