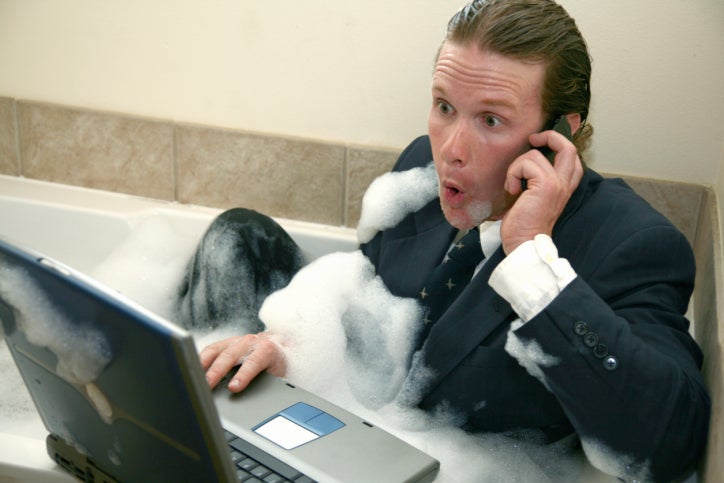 Remote and mobile workers mean companies will have to conduct more conference calls to keep them in the loop. But what, exactly, are remote workers doing during these dial-in meetings? The answers may surprise you, according to results from a new InterCall survey of more than 500 full-time, remote workers.

It’s more than just remote workers wearing bathrobes while attending a conference call, although this happens, too. They’re probably not even listening to co-workers and managers ramble on, at least not fully. The survey found 82 percent of respondents admitted to working on unrelated items while on a conference call.

Many remote workers prefer to use their mobile phones instead of a landline. That’s because mobility frees them up to do all kinds of things. Here’s a sample of what remote workers say they’re doing on a conference call:

If that’s not bad enough, there’s more shady behavior from the survey.

Respondents have jumped on a conference call while in the bathroom, at McDonald’s, at the racetrack and while chasing their dog down the street. One respondent said she was on a video conference call and had to take measures to hide her bikini top while at the beach. Another was inside a fitting room while trying on clothes. There was no instance of someone yelling, “Fore!” at the golf course, but that’s not far-fetched.

Lastly, two out of five respondents have secretly dropped off the call and, later, pretended to have participated the entire time. Then there’s the 27 percent who admitted that they’ve fallen asleep — and we’re not talking about the 8 a.m. Eastern Time conference call for remote workers on the west coast.