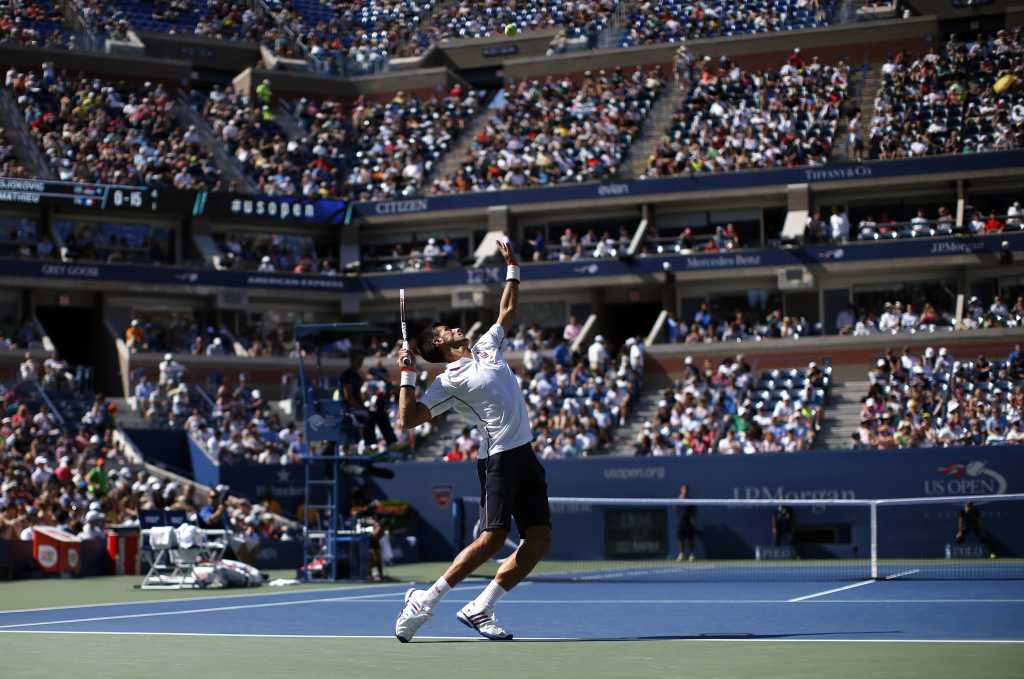 NEW YORK CITY – There is a festival atmosphere here at the 2014 U.S. Open tennis tournament as hundreds of thousands of fans gather to see tennis stars and up-and-comers alike vie for prize at the last Grand Slam competition of the tennis year.

However, as the crowds revel, deep in the windowless heart of the USTA Billie Jean King National Tennis Center, a team of IBM IT professionals — surrounded by wall-to-wall arrays of computers and digital displays — is monitoring and maintaining the mobile, cloud and analytics technologies that are transforming the tournament experience for both on-site fans and viewers at home.

“We spend about 50 weeks of the year focusing on recreational and regional tennis,” says Nicole Jeter West, senior director of Ticketing and Digital Strategy at the United States Tennis Association (USTA), the nonprofit governing body for tennis in the U.S., which stages the two-week U.S. Open tournament each year. “For 50 weeks a year, we pretty much operate like a normal business. But during those two weeks, we increase by 40 times the amount of traffic to our infrastructure.”

In addition to the hundreds of thousands of spectators who come to watch the tournament live, Jeter West says fans around the world, in more than 200 territories and countries, are watching on television. And millions more around the world are visiting the USOpen.org website to follow the action, watch live-streamed matches and get scores, stats and news.

To put some concrete numbers on it, in 2013 the official U.S. Open iPhone app was downloaded and/or updated 811,000 times (a 110-percent increase over the previous record) and the official Android app was downloaded and/or updated 300,000 times. In addition, the U.S. Open website drew 419 million page views (178 million from mobile devices and 41.7 million from tablets) and was accessed by more than 12.6 million unique visitors worldwide, an 8.6 percent increase from 2012. Fans viewed more than 2.9 million hours of live-streamed tennis and viewed on-demand videos 8.7 million times during the tournament.

Like most other major sports, tennis is undergoing a second-screen revolution as it seeks to engage with fans in a new and ongoing way through the use of mobile technologies. IBM, which for 25 years has partnered with the USTA to deliver the back-end infrastructure that powers the U.S. Open tournament, is leveraging its broad suite of technologies and solutions — including predictive analytics from its Watson Foundation — to help the USTA drive transformation of the fan experience.

“Each year, we work closely with IBM to ensure we’re ready to use the most advanced data and analytics technologies available to create a mobile experience that brings our fans the latest and greatest information and insights from the U.S. Open tournament,” Jeter West says. “We value being able to introduce new ideas knowing that IBM is going to be there to provide the innovation and infrastructure needed to bring our world-class event to life for tennis fans everywhere.”

A key example is the IBM SlamTracker analytics technology. SlamTracker is a real-time stats and visualization platform that analyzes eight years of Grand Slam data (more than 41 million data points) to identify patterns in player styles. Before each match, IBM analyzes historical matches between the players (or players with similar styles for first-time matches), identifying key performance indicators known as ‘Keys to the Match.’

Then during the match, each player’s performance is measured against their keys and updated in real-time. The data points include: type of shot, scores, serve percentages, duration, winners, points and serve speed. This year, IBM has upped the ante by tracking new data like ball and player movement — where the ball travels and how far a player runs in a given match.

Once the data is captured, SlamTracker offers a momentum tracking feature that captures and visually maps player momentum in real-time, point by point. SlamTracker also tracks Twitter conversations about the players on the court, identifying how much positive sentiment each player is generating throughout the match.

“Data analysis and visualization is at the heart of our innovation at this year’s tournament,” says Elizabeth O’Brien, Worldwide Sponsorship Marketing Leader at IBM. “In particular, we’ve re-imagined how fans experience the matches. We’ve added new interactive and intuitive graphics to help fans follow the action more easily, identifying and analyzing the variables that affect players’ performance and highlighting match stats to explain outcomes in points, games and matches.”

“This visual approach is bound to make the already popular IBM SlamTracker analytics tool even more compelling,” she adds. “SlamTracker brings the matches to life, going beyond dishing up scores to analyzing real-time and historical player, match and tournament data. This year, we’ve redesigned SlamTracker to feature point-by-point visual analysis that adds context to the on-court action. For example, if Roger Federer serves an ace, a graphic may appear showing how many aces he served per set in that match so far versus the aces of his opponent.”

IBM’s analytics technologies aren’t just serving up data for the tournament’s fans. IBM is leveraging its predictive analytics and social sentiment analysis to predict, allocate and monitor capacity in the cloud that supports the U.S. Open. The IBM Cloud Orchestrator software can automatically increase or decrease capacity as traffic spikes and recedes.

“I get to sleep at night a little bit during the Open because I know that when I go to sleep, the site’s not going to crash and the infrastructure is not going to go down,” Jeter West says.