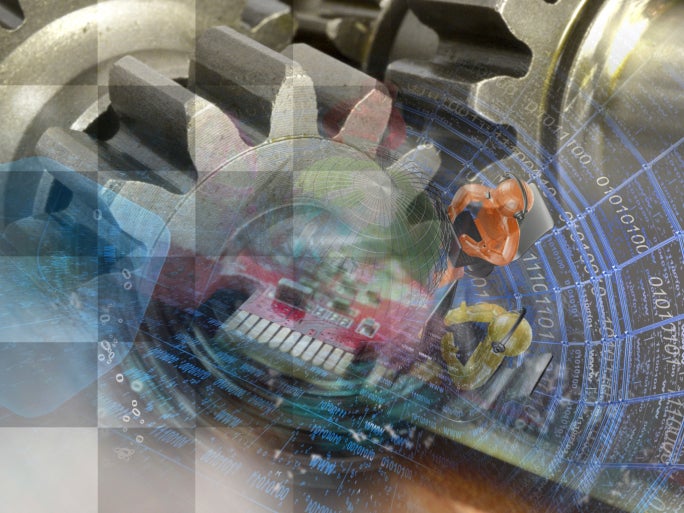 To many people, the phrase “Internet of Things” conjures images of consumer gadgets like wearable fitness monitors, Google Glass or maybe even self-driving cars. But some of the most exciting and practical applications are happening in the Industrial Internet of Things (IIoT): smart agriculture, smart cities, smart factories and the smart grid.

That said, the IIoT brings with it tremendous amounts of complexity. To tackle that complexity, organizations must overcome five key challenges, according to a new report by National Instruments (NI), the $1.25 billion company that makes the automated test equipment and virtual instrumentation software at the heart of much of the IIoT equipment out there.

“We essentially make the brain that goes inside all of this industrial equipment that everyone is trying to add industrial intelligence to,” says Eric Starkloff, executive vice president of Global Sales and Marketing for NI. “We make the hardware technology and software infrastructure that enables someone building a machine, robot, healthcare device or factory to build the intelligence for their particular application on top of that platform.”

At its root, the IIoT is a vast number of connected industrial systems that communicate and coordinate their data analytics and actions to improve performance and efficiency and reduce or eliminate downtime. A classic example is industrial equipment on a factory floor that can detect minute changes in its operations, determine the probability of a component failure and then schedule maintenance of that component before its failure can cause unplanned downtime that could cost millions of dollars.

Starkloff points to another example, NI customer Airbus Group, which is prototyping the “factory of the future” with NI’s help.

For instance, he says, an operator might be looking at a bolt she needs to fasten. That operator could be wearing smart glasses that can identify what the required bolt is and where it’s located on the factory floor. That intelligence can also be communicated to the drill the operator is using to ensure it’s the correct tool for the job and then adjust itself to provide just the correct amount of torque to fasten the bolt. On the back end, the system could automatically update inventory systems as parts are used.

[Related: Why Cisco, Intel, and Qualcomm are Funding IoT Startups ]

“The future is here, it’s just unevenly distributed,” Starkloff says. “Airbus is still in the prototyping phase, but there are working prototypes of all these things today.”

The possibilities in the industrial space are nearly limitless: smarter and more efficient factories, greener energy generation, self-regulating buildings that optimize energy consumption, cities that adjust that can adjust traffic patterns to respond to congestion and more. But, of course, implementation will be a challenge.

Building the consumer Internet was and is a complex challenge, but the IIoT is more daunting still.

“Both involve connecting devices and systems all across the globe, but the IIoT adds stricter requirements to its local networks for latency, determinism and bandwidth,” the NI report notes. “When dealing with precision machines that can fail if timing is off by a millisecond, adhering to strict requirements becomes pivotal to the health and safety of the machine operators, the machines and the business.”

Industry consortiums are working to address this challenge using standards originally developed for Audio/Video Bridging — the deceptively complex task of synchronizing video and audio in a stream.

“One of the places we’d like to use that technology is vehicle-to-vehicle communication for automotive,” Starkloff says. “It doesn’t do much good to have an adaptive cruise control system that applies the brakes just a few seconds too late.”

Adaptability and Scalability Is Paramount

Adopting the Industrial Internet of Things will require a change in the way organizations design and augment their industrial systems. IIoT systems must be adaptive and scalable through software or added functionality that integrates with the overall solution, Starkloff notes.

The traditional design and augmentation of industrial systems tends to go one of two ways: either you add functionality by tacking on vendor-defined black boxes, or you design a proprietary or custom end-to-end solution.

The former can be implemented rapidly, but typically makes it difficult to acquire and analyze the data generated. Sure, you’ll be able to acquire the data after a catastrophic failure to determine what happened, but forget about continuous monitoring and real-time adjustments to improve efficiency and prevent system downtime.

Meanwhile, the latter can mean a well-integrated system in which data can easily be shared, but proprietary communication protocols mean the whole system itself is essentially a black box.

“As soon as an update is required, the engineer faces the dilemma of tacking on a solution that may not communicate well with the whole system or of starting the process over and creating a new end-to-end solution,” the NI report says.

“If you’ve got a lot of black box systems, if they don’t communicate well together, then you’re missing the whole point of the industrial Internet,” Starkloff says.

Security Is a Key Issue

Security too, is paramount in industrial Internet applications. These applications can be built on tens of thousands of sensor nodes, increasing your threat surface area by orders of magnitude. And bad data injected into your system has the potential to be as damaging as data extracted from your systems via data breach.

“As massive networks of systems come online, these systems need to communicate with each other and with the enterprise, often over vast distances,” the report says. “Both the systems and the communications need to be secure, or millions of dollars’ worth of assets are put at risk. One of the most prevalent examples of the need for security is the smart grid, which is on the leading edge of the IIoT. As information on the grid becomes more accessible, so does the damage a security breach can inflict.”

The IIoT Must Be Built for Maintenance and Updates

Industrial Internet components need to be built with maintenance and updates in mind. Industrial systems need to be continually modified and maintained to meet changing requirements.

“As more capabilities are added, software updates are needed or more systems must be added,” the report says. “Soon a tangled web of interconnected components starts to form. The new system has to integrate not only with the original system but also all of the other systems. Imagine modifying or updating thousands or millions of systems located all over the world, including some in remote locations.”

Investing in Flexibility Is Crucial

Industrial infrastructure is no small investment. NI believes that developing and deploying industrial Internet systems will represent a massive investment for decades to come. That means it’s not enough to simply think about today’s needs or even immediate future needs when deciding where to invest. To be capable of adapting to changing requirements over time, you need to build on open, integrated hardware and software platforms, and you need a real-time network that can scale with new technologies.

“The only way to meet the needs of today and tomorrow is not by predicting the future but by deploying a network of systems flexible enough to evolve and adapt,” the report says. “The way forward involves a platform-based approach; a single flexible hardware architecture deployed across many applications removes a substantial amount of the hardware complexity and makes each new problem primarily a software challenge. The same principle must be applied to software tools to form a powerful hardware-software platform that creates a unified solution. An effective platform-based approach does not focus on hardware or software but instead on the innovation within the application itself.”

Starkloff notes that organizations like the Industrial Internet Consortium (IIC), Institute of Electrical and Electronics Engineers (IEEE) and the AVnu Alliance (a consortium dedicated to interoperability for Time-Sensitive Networking) are working hard to define standards for the IIoT.