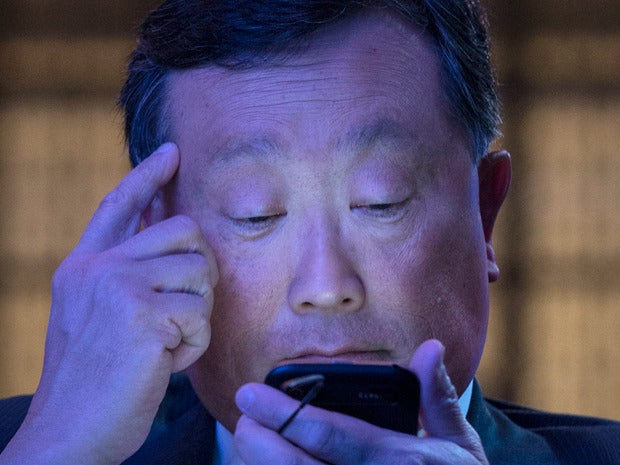 Earlier this week, BlackBerry’s typically tight-lipped CEO, John Chen, penned a lengthy letter, published on the company’s Inside BlackBerry blog. Chen was writing in response to the FCC’s “recently announced support for reclassifying both wireline and wireless broadband as Title II services.”

Chen broke his letter into three sections: Net neutrality, carrier neutrality, and content and application neutrality. He makes some valid points in the first two sections — even though they offer not-so-subtle hints that he’s about to veer off message, or at least shift gears dramatically. It’s in the third section that Chen goes off the rails.

You can jump over to Chen’s post if you want to read the specifics, but two of his comments sum the whole thing up nicely.

“Customers would benefit from the ability to access … any application … using any device.”

True? Sure, why not.

“[N]eutrality must be mandated at the application and content layer if we truly want a free, open and non-discriminatory Internet.”

Ummm. Remember those rails I mentioned? This is where Chen and said rails part ways.

In December, I sat down with BlackBerry’s Senior Manager of Product Marketing, Sonia Moniz-Bennett, during a pre-release briefing for the company’s BlackBerry Classic smartphone. When we finished walking through the hardware features and had moved on to the software, Moniz-Bennett began to talk up the Amazon App Store, which comes preloaded on the Classic and lets users download around 400,000 Amazon apps.

Moniz-Bennett told me with confidence, and slightly averted eyes, that the Amazon App Store helped BlackBerry close “The App Gap” — a term I hadn’t heard until that day and one that makes me imagine a large meeting room in Waterloo packed with anxious people in expensive suits staring at a dry erase board with the words App Gap written on it in huge, black capital letters. BlackBerry knows its app ecosystem is a major problem. It has been for years, and the company is still trying to devise some sort of effective stopgap solution.

After reading through Chen’s neutrality letter a few times, I believe his intention is to plant the seeds for the concept of app and content neutrality, and in doing so, try a new approach to capping that gap. My initial reaction was summed up nicely by an AndroidCentral.com headline that categorizes Chen’s comments as a “batshit-crazy smartphone dream.”

However, are Chen’s really comments “crazy”? I don’t think so. In fact, they make perfect sense, if you’re leading a company with an Achilles heel in the form of an “app gap” that’s widening every day.

Crazy? No. Desperate? Absolutely. Chen has proven to a be surprisingly solid leader since he took the company’s reigns from the outspoken former CEO, Thorsten Heins, who promised much and delivered little in the way of recovery for BlackBerry. BlackBerry has experienced signs of a potential turnaround under Chen. For that I give him credit. And I applaud the man for thinking so far outside of the box. Unfortunately, thinking outside of the box often leads to running off those previously mentioned rails.

Application and content creators vote with their wallets, just as consumers do. If BlackBerry cannot incent customers to invest in its products, it cannot expect developers to invest their time, energy and funds in content that won’t ultimately deliver ROI. BlackBerry also cannot expect its competitors to “throw it a bone” by creating BlackBerry versions of apps and service. Now that is crazy.

Finally, BlackBerry should not expect the government to come to its rescue and force developers to cater to an audience that will not support their efforts and could eventually put them out of business. In fact, BlackBerry is insulting the very same developers it tried so hard to woo by suggesting the government should force them to do something.

Chen’s neutrality comments are his first major PR gaff, at least in my opinion, and they reek of desperation. They also show a fundamental misunderstanding of the modern application ecosystem, and that doesn’t bode well for BlackBerry. Developers and content creators want to make money, whether they’re individuals cooking up code in some dank basement or corporate coders with corner offices. The problem is the perception (and perhaps the reality) that popular BlackBerry apps and services simply don’t translate into as much profit as iOS and Android apps.