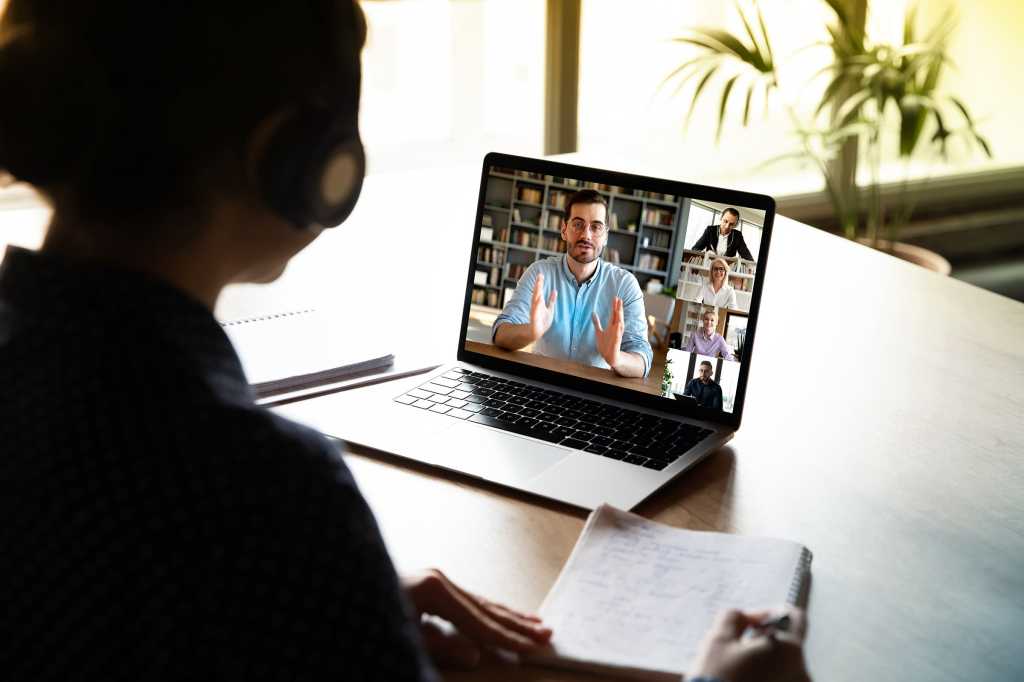 The pandemic may have been the kick to get everyone on board for work-from-home but, two years in, workers have made it clear that flexible work is no longer optional. According to a Gartner study, a company’s work-from-anywhere policy has become a factor in employee decisions to take or stay in a job, as 39% of US adults would consider leaving a job if remote work were no longer permitted, a number that’s higher (49%) among millennials and Gen Z.

In short, flexible work is here to stay, at least if you want to hire and keep staff. So, if some of your team is migrating, at least partly, back to the office, you are likely looking at hybrid meetings — with some people gathering in a conference room while others call in — for the foreseeable future.

This meeting model is different from all-video calls or all in-person meetings. It raises technical challenges, requires new skills, and demands that someone — perhaps many people — develop mad facilitator chops.

To help with that, I spoke to leaders who have mastered the art. They told me what works, what doesn’t, what you need to buy to make hybrid seamless, and how to transform meetings into a productive part of your day.

“If you’re trying to make sure that engagement is equal across virtual and in-person participants,” says Ray Kimble, founder and CEO of Kuma, “that starts with technology.”

In the past, setting a speaker phone on a conference table and dialing in the remote team was the extent of most companies’ investment in hybrid meeting technology. “Hybrid was common before the pandemic,” says Jim Kalbach, chief evangelist at MURAL. “We just sucked at it.”

Few people who experienced these meetings would disagree. The remote team — dialed in through a speaker phone — was often ignored, unable to hear or be heard, or forgotten entirely. No one in the conference room knew who was on the call. People got talked over. Some people never had a voice. There was shouting. It was often bad. “The renewed conversation around hybrid is not that it’s new; it’s that we have to get it right this time,” Kalbach says.

Adding video — in the form of an in-room video camera as well as wall-mounted videoconferencing screens — goes a long way toward equalizing the engagement of the people in the room and those calling in, which is why many companies have been reworking conference rooms to include these technologies.

“One of the key pieces is making sure you have the right setup and that whoever is coordinating the meeting knows who is where,” says Molly Brown, vice president of engineering at Qumulo.

Like many companies, Qumulo has built out its conference rooms to create a better hybrid meeting experience. “We have some rooms that have Zoom Room screens,” says Brown. “These are large touchscreens that Zoom produces. Those work well for midsize and small rooms and are easy to set up.” Other rooms have Owl conference cameras or other video systems.

Add some collaboration tools, too

If you add online collaboration tools to your conferencing rig, you can up the engagement even more. These move the focus of the meeting away from the talking heads and toward the task at hand, which, if you hope for collaboration, is the direction you want attention to go.

“We like a tool called Miro,” says Brown. “It’s useful for retrospectives, ideation, and brainstorming exercises.” Sometimes, though, holding a piece of paper up to the camera works for her team, too, she says. “When we are talking about core designs, some people just like to have a piece of paper and a pen handy so they can draw a design or show a visual to everyone.”

Put everyone on the screen

A good hybrid meeting also requires people to be good at moderating, facilitating, and participating in them. For that, you need skills, habits, and meeting hygiene.

For Mark Schlesinger, senior technology fellow at Broadridge, the all-video calls that became the default meeting method during the pandemic brought a heightened level of collaboration that his team didn’t want to lose in hybrid meetings.

“Suddenly everyone had a voice,” he says of the Zoom calls. “It wasn’t always the conference room taking over the conversation.” As the company moved to a hybrid model, “we needed a solid solution to retain this collaborative nature.”

Schlesinger discovered the solution — a mashup of video calls and in-person meetings — when discussing the problem with his in-college daughter. She told him that the rule for classes at her school was, “even if you’re on-site, everyone has to flip their device up and enable video so everyone can see everyone, including the instructor and remote students, on their screen.”

This is, essentially what they are doing at Broadridge, though they use the in-room audio of yore for better fidelity. This setup retains everyone’s voice, gives a visual — and a name and title — to everyone in the meeting, and “it’s less likely that the conference room talk will overshadow the remote participants,” says Schlesinger.

Get help with moderation

“I try to have somebody moderate the chat,” says Brown. Because watching the chat channel while speaking to a group requires more sensory inputs and grey matter than most humans come equipped with. Tasking another team member with watching that channel helps remote people ask questions, and get them answered, so that the in-room participants don’t overshadow.

Dean Guida, founder of Slingshot and CEO and founder of Infragistics, believes in assigning a scribe to take notes at meetings. “The scribe captures the essence of the discussion and the action items,” he explains. “I always leave five minutes at the end of the meeting to review the action items and make sure everyone understands the who, what, and when, and can note if anything got missed.”

Guida also believes in passing around the job of scribe and facilitator so the tasks don’t always fall to the same person. Because if you are facilitator or scribe, it alters the way you participate in the meeting.

Many people I spoke to suggest issuing a meeting-etiquette policy so that expectations around participation and matters once dictated by the workplace will be spelled out for meetings that happen, in part, in living rooms, basements, and spare bedrooms.

“You can set these meeting expectations at any time,” says Trish Bishop, an IT project manager turned leadership coach, “You can say, I’m feeling like the team is not getting full engagement in this hybrid environment. Let’s set shared expectations.”

She suggests getting the team to come up with the rules themselves, rather than issuing them from on high because it’s easier to get buy-in and the expectations will more likely reflect the reality of people’s home lives. The rules can cover everything from whether the video camera should be on, what an acceptable background is — at least for externally facing meetings — or if a presentable wardrobe is required.

But no policy directive, however egalitarian, will overcome a poorly planned or managed meeting.

“Keeping people engaged is a habit that starts with the agenda,” says Kuma’s Kimble. “If you’re not sticking to a set agenda and not respectful of people’s time, they will check out.”

And losing people in meetings is a problem that extends beyond the conference room.

“Nothing kills a culture and destroys motivation like having too many meetings or meetings where nothing gets done,” says Guida. “It affects performance and whether people quit or stay.”

Kalbach says good hybrid meetings need more than an agenda. “You need a purpose and a way to get there,” he says.

Even with an agenda, he says, the usual dynamics unfold. Dominant voices talk while quieter ones fade back and maybe — if their camera is off — cook pasta or do laundry. You will be looking for ways to bring everyone’s attention back.

“If you bring an activity, though, then say, ‘Let’s do a two-by-two matrix and we’re going to decide together by voting’ — that way, you ensure participation,” Kalbach says.

Another trick for keeping a meeting focused, he says, is to create a system for turn-taking.

“A popular one is popcorning, where the last person to speak picks the next person,” he says.

Not only do these tricks overcome verbal traffic problems, “you can start thinking about meetings as places where you get stuff done,” he adds.

Once you start looking for a purpose instead of an agenda, you’ll find it. If someone says, “We need to get this document together,” and your meeting needs a purpose, you might bring the document and get the work done in the meeting.

“That way, you come out of the meeting with no action items because you already did the work,” Kalbach says.