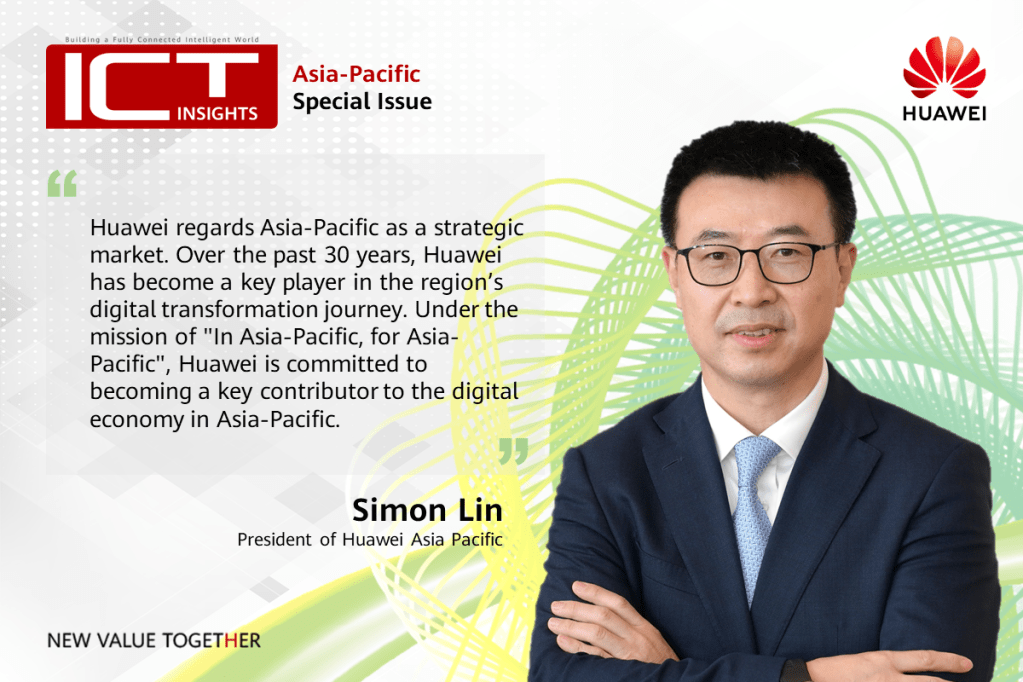 The digital economy has become a major engine of the global economy. Green and low-carbon technologies have become new drivers for sustainable development. Asia-Pacific is ripe with opportunities for digital transformation, and a digital Asia-Pacific is rapidly approaching.

According to the ASEAN Development Outlook report and the Southeast Asia Digital Economy Report, by 2030, ASEAN will become the fourth-largest economy in the world. The region’s internet economy market is expected to reach $1 trillion.

In this process, Asia-Pacific countries have released clear policies for digitalization and low carbonization.

Huawei regards Asia-Pacific as a strategic market. Over the past 30 years, it has become a key player in the region’s digital transformation journey.

With its mission of “In Asia-Pacific, for Asia-Pacific,” Huawei is committed to becoming a key contributor to the digital economy in Asia-Pacific. And Huawei will use innovation to build a better green digital life from three aspects.

Leading Digital Infrastructure as the Foundation for Digital Economy

In these diverse ICT policies, digital infrastructure has become the foundation of digital economy. Moreover, it is becoming more intelligent and green.

As a trusted ICT partner, Huawei hopes to help Asia-Pacific build a leading and green infrastructure, including 5G, broadband, and data centers. So far, Huawei has provided connectivity for more than 90 million households and 1 billion mobile users in Asia-Pacific. With the most advanced technologies and best services, the company is the largest ICT solution provider in the region. According to the Gartner report, Huawei’s IaaS market share ranks No.2 in China, No.4 in the emerging Asia Pacific market.

While Asia-Pacific moves toward carbon neutrality, Huawei integrates digital and power electronics technologies, and enables energy digitalization for a greener future. In Singapore, Huawei collaborated with Sunseap Group to develop one of the world’s largest offshore floating PV projects. It’s expected to produce over 6 million kWh of energy per year, and reduce carbon dioxide emissions by over 4,200 tons.

Second, Huawei will build an open and healthy industry ecosystem with customers and partners.

To enable ICT startups in Asia-Pacific, Huawei plans to invest 100 million USD in Spark project over the next three years.

Facing the future, Huawei will bring global R&D ability to the local market and innovates based on customer needs. For example, Huawei and partners built Open Lab in Singapore and 5G Ecosystem Innovation Center in Thailand. Currently, 5G EIC has gathered more than 100 partners to incubate 5G applications.

Based on the platforms above, Huawei hopes to help customers and partners make good use of infrastructure, and extend ICT capabilities to industry digitalization.

Finally, Huawei commits to building an inclusive digital Asia-Pacific. As digitalization speeds up, there is also a stronger demand for digital talent. According to the Korn Ferry report, Asia-Pacific will face a 47 million talent gap by 2030. At the same time, this region is full of young energy and potential.

Through the Huawei ASEAN Academy and Seeds for the Future, Huawei has worked with partners to train 170,000 local talents. In the next five years, Huawei will continue to train 500,000 digital talents for the Asia Pacific region.

Meanwhile, to leave no one behind in the digital world, by cooperating with Thailand’s customers and partners, Huawei contributed to the USO 2.0 project with AirPON solution, which has provided broadband services to more than 14,000 villages. In Bangladesh, Huawei and partners launched the Digital Training Bus project to benefit over 240,000 women by 2023.

Coming together is a beginning, working together is a success. In the past 30 years, Huawei is rooted in the region’s fast digitalization journey. As always, Huawei is confident and determined to work with customer and partners, becoming a key contributor to Asia-Pacific digital economy. Innovating non-stop, together for better green digital life.